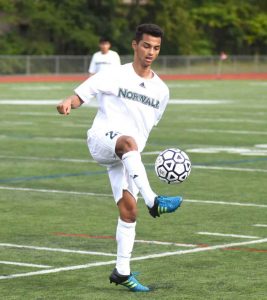 NORWALK — For every team that comes together and clicks and goes on a journey to remember, there are teams which never quite gel and fall far short of expectations.

The Norwalk High boys soccer program has boasted teams on both end of the spectrum, including 2012’s Class LL champs and last year’s run-of-the-mill, lucky-to-make-the-postseason disappointment.

The only thing the two have in common now is both are ancient history as Chris Laughton gets to retool his Norwalk program as a young and hungry squad.

“Yeah, I feel like it’s a youth movement, kind of,” he said. “It’s a very young group, but it’s an enjoyable group to work with. They’re eager to learn and you can see how much they’ve improved in a short period of time.”

While nine seniors are on the roster, Laughton said most of his team’s upper talent is in the other three grades. A handful of those seniors might see a lot of on-field action, including captains Esteven Restrepo (fullback), Anthony Hernandez(midfield) and Jason Carvajal (midfield). They, along with back-up goalie Nicholas Ceja, Dan Cano, Dan Lepoutre, Alexis Quiche, Michael Bober, and Dakota Casey make up the senior class whose leadership and acceptance of the young talent will be vital in the team’s success.

Junior Cole Judkins has stepped up in the goalkeeping spot and won the starting job while classmates Sebastian Echeverri,Lucas Araujo, and Nicolas Guzman are all returnees from last year’s varsity team, which finished 5-6-5 and lost in the first round of the state tournament. Christian Moncada is hurt and upon his return will make the Bears deeper in the midfield.

The Bears are also going to be bolstered by sophomores Fred Rosales in the back and Michael Hildalgo and Matthew Hernandez up top.

An addition to that class is Lance Garcia, a center back who played academy soccer last year, but returned to the high school fold this season.

“He’s got the skill set, for sure,” Laughton said. “He’s soccer intelligent. I think he can definitely contribute and help us out.”

While the Bears might be young, Laughton said his team is not going to use that as an excuse to fall back on.

“We’ve been saying to them we’re not using our age as an excuse,” he said. “They all know the expectations and standards of the program and where want to go. We’re hoping to make some noise.”

That was the goal last year, too, but with leadership lacking the team never coalesced. Last year’s Bears started 2-6-3, forcing itself to finish 3-0-2 just to make the state tournament.

A lackluster 4-1 loss to Windsor ended Norwalk’s season in the state tournament.

“I think we were disappointed last year,” Laughton said. “I know a lot of the returning guys were disappointed with how last year finished and we’ve got a bit of a chip on our shoulder, like we have something to prove. But it also feels like a clean slate.”

With its history behind it, Norwalk opens play on Friday, facing Fairfield Warde at 4 p.m., in Fairfield.