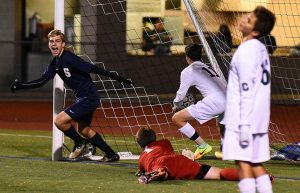 NORWALK — This time the tie was on the other foot.

One game after the Norwalk boys pulled out a point with a late second-half goal on Saturday, the Bears found themselves on the receiving of such a result on Monday night.

Staples’ Teddy Davenport headed a Will Birch direct kick inside the far post and just under the crossbar with 5:27 left to play as the Wreckers and the Bears played to a 1-1 tie at Testa Field.

The Wreckers, who are unbeaten in eight straight games, moved to 7-2-3 on the season while Norwalk moved to 4-5-2 with its second straight deadlock.

On Saturday, Norwalk pulled out a 1-1 tie at Trumbull.

This time, though, it was the Bears who let the lead slip away.

“It’s bittersweet,” Norwalk coach Chris Laughton said. “We’ve trained exactly that same play and it was just a lack of focus and they caught us on it.”

Staples was awarded a free kick approximately 45 yards from the goalmouth after players from each team collided chasing a 50-50 ball.

Birch stepped up to take it the kick and looked at Davenport before delivering.

“I was standing on the 30-yard line and No. 10, Will Birch, just told me to run,” Davenport said. “He played a perfect ball to me and I was lucky to get my head on it. I was going far post, but I didn’t think it’d be that nice, though.”

If the Wreckers are adept at one thing this season, it’s the team’s ability to place long direct kicks where in the vicinity of where they want to.

“Will serves a great ball,” Staples coach Dan Woog said. “We have a lot of kids who can serve great balls. We’re kind of unpredictable that way.”

The goal came after Staples controlled most of the midfield over the final 40 minutes play. Still, the Wreckers had few opportunities to get past Norwalk’s defense of Liam Bleakley, Steven Restrepo, Lucas Arajuo, and Jon Roach, to test Bears goalie Cole Judkins (2 saves).

“I’m proud of how we fought,” Laughton said. “We were very organized defensively. We have been all season.”

One letdown was it all took for Staples to strike and escape with a point.

“It feels like a tie, but we’d rather tie them than the reverse,” Woog said. “(Norwalk’s) fast. They’re far better than their record indicates. They gave us a battle. It was your typical Staples-Norwalk match.”

The Bears struck first to take a 1-0 lead.

The goal came just 10:35 into the contest when Michael Hildalgo played a ball from right side of the field and crossed it into the box. Sebestian Echeverri was there to knock it home past Staples’ goalkeeper Ziggy Hallgarten (5 saves).

It was Echeverri’s 12th goal of the season. The Bears have scored 23 goals as a team.

“He’s done a great job, but we need other guys to pick up the slack,” Laughton said. “We need, in this home stretch, for other guys to step up offensively.”

Offense comes tough against the Wreckers, though.

Behind a defense that includes Hallgarten in net and Davenport, Chris Martenson, Josh Berman, Sam Kantor, and Gabe Baltierra, Staples has only given up five goals all season

“We’ve been pleased with our defense all along,” Woog said. “We love our defense.”

When one of those defenders steps up to score a goal that preserves a tie, that’s even better, Woog said.

Norwalk plays at Brien McMahon on Thursday while Staples plays at Darien the same day.