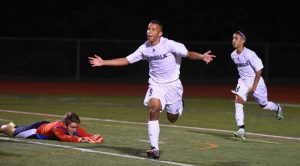 NORWALK — Over the course of an 80-minute game, Anthony Hernandez knows he and Sebastian Echeverri are going to get on the same page and make a connection or two.

After that, both Norwalk High boys soccer players know, if it happens enough a goal is going to be score.

Echeverri’s goal off Hernandez assist with 32:45 to play in the second half was all host Norwalk needed to defeat Wilton 1-0 in an early season FCIAC showdown at Testa Field.

“They have a great connection and (Hernandez) is always looking for (Echeverria),” Norwalk coach Chris Laughton said. “It was a great pass and a great finish.”

Hernandez slid a pass from the right side of the goal, diagonally toward the box, where Echeverri was making a run.

“I always try to put my teammates into the best place to score,” said Hernandez, a senior tri-captain. “I’m more of an assist man, so that’s what I’m looking for. After 80 minutes, I’m bound to find him or once or twice. It was just good to get the goal.”

Once the ball found its way to Echeverri’s feet, he did the rest, beating Wilton’s rushing goalkeeper Charlie Hess for the game’s lone tally.

“I just tried to put in the corner and that’s it,” Echeverri said. “We had been patient the whole game, so we knew one was coming. I’m just glad I was able to help my team.”

With both defense on point for much of the game, that one goal seemed as though it would have to stand up and it did.

“I thought the defense did a great job,” Laughton said. “That’s been our trademark all through the preseason. Defensively, we were really solid.”

The defense limited Wilton to getting just one shot one goal, which Norwalk keeper Cole Judkins made a nice diving save on.

Likewise, Wilton was solid defensively, but it was Hess who was the star of the game, making seven saves — five of which had him airborne and parallel to the ground.

“Their goalie made some phenomenal saves. He really did,” Laughton said.

Norwalk improved to 1-1 after dropping a season-opening game 3-0 to Fairfield Warde on Friday.

Wilton slipped to 0-2, but after falling to Westhill by a 4-1 count on Friday, Warriors coach Jim Lewicki was pleased with his team’s effort.

“You know what? We’re young and inexperienced,” said Lewicki, whose team graduated 23 seniors from a year ago. “This is a group of guys that just started playing together and figuring out things, but I thought the effort today was outstanding.

“The only disappointing thing was we didn’t come awy with a point,” he added.

Evershed got good foot on the ball while looking to the left post, but Judkins went airborne to slap away the shot and keep Wilton off the board.