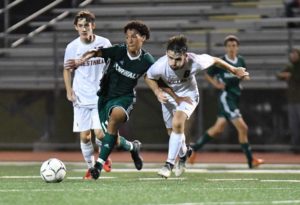 NORWALK — Westhill sophomore goalkeeper Nathanael Aybar wants nothing more than to prove himself to his coach and teammates.

On Monday night, in a battle of FCIAC boys soccer unbeatens, Aybar won them over in a big way.

The first-year varsity starter turned away seven of 11 shots in the second half, leading Westhill to a 3-2 victory over Norwalk at Testa Field.

“It was actually really crazy in that second half,” Aybar said. “This is my first year starting after I earned the spot, but my defense was really great today.”

A win like Monday’s was a big confidence boost for his keeper, Westhill coach Joe Andrews said.

“He’s only a sophomore, so he had some nerves coming in, but he played his tail off,” Andrews said. “We did our best to support him, but he came up with some big saves in big spots on some big shots. This game easily could have gone the other way.”

Shortly after Westhill took a 3-1 lead early in the second half, Aybar denied a point-blank line-driving shot from Norwalk’s Matt Hernandez, and then deflected the rebound, as well.

While Norwalk would get one goal back, the Vikings would still hold on down the stretch.

“This was a big test for us,” Andrews said. “We have a lot of new guys and we were ready for it. Win or lose, these guys came out and worked really hard.”

For Norwalk, their late game-surge from two goals down just wasn’t quite enough.

“It’s the details of the game,” Norwalk coach Chris Laughton said. “We didn’t do a good job on any of the goals. We didn’t focus on the thing we needed to do. We have to be more disciplined offensively, but this will be a good lesson for our guys. Westhill is a good team.”

Eoin Keogh scored two goals and Vince Manginelli had a goal and an assist as the Vikings improved to 3-0 on the season.

Norwalk — which got two goals out of Michael Hidalgo — slipped to 4-1.

Early in the second half, 23 seconds proved costly for the Bears.

Westhill scored twice in that span to take a two-goal lead in the game.

“Whenever you can do that against Norwalk, man, you have to be thankful,” Andrews said.

With 32:31 left to play in the second half, a Norwalk defender was called for a handball in the box, leading to a penalty kick for the Vikings.

Keogh took the kick and booted it home for a 2-1 lead.

As the Bears tried to push the ball down the field, the Vikings quickly retained possession and made their own push back.

A defensive miscue allowed the Vikings a 2-on-1 opportunity as Lucas Goldfuss slipped a crossing pass to Mangienlli racing down the middle of the field.

Manginelli kicked the ball home for a 3-1 advantage with 32:08 left on the clock.

“It shows how much heart our team has to go down one-nil and to come back on their turf,” Keogh said. “It was a team effort today. Everybody worked so hard. I just want to go home with the team and have fun.”

It was the host Bears who jumped on top by a 1-0 score in the fifth minute of the game.

The Bears’ Lance Garcia sent a through ball past midfield to Hidalgo, who carried the ball up into the box.

Hidalgo then made a move around a defender and fired off a shot that beat Aybar for a 1-0 lead.

Eight minutes later, though, Westhill found the equalizer on a corner kick.

Manginelli sent a perfectly placed corner to the head of Keogh, who redirected the ball inside the far post to tie the game.

From there, the Vikings defense withstood all but one of Norwalk surges.

The Bears got to within a goal when Matt Hernandez fed Hildalgo for his second goal of the game to make it 3-2.

Mateo Davalos almost tied the game with 17:45 to play when he hit the left post and later sent a ball just wide of the net with 18 minutes to play.

Gianluca Trofa made six saves for the Bears.

“I’m proud of them,” Laughton said of his Bears. “This group is never going to give up. We almost got one at the end. But it’s an 80-minute game. I thought we came out great, but we took our foot off the pedal. They came back and it changed the tide of the game.”