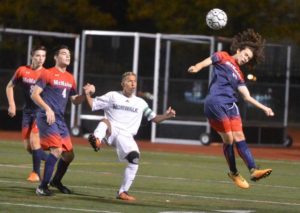 NORWALK — Finally, somebody got to feel both the elation and devastation of one of the FCIAC’s best boys soccer rivalries.

After three straight years of draws, Norwalk scored three goals in the final 11 minutes of play to post a 3-1 victory over cross-city rival Brien McMahon at Testa Field on Tuesday night.

“Once we got one goal back, we just rose up,” said Fredy Rosales, a junior who would set up the winner.

Norwalk was awarded a controversial penalty kick with 10:50 to play and Bears senior Sebastian Echeverri buried the shot to tie the game at 1-1.

The tally ignited Norwalk as the Bears turned up the pressure on McMahon’s defense.

In the final three minutes of play, a couple of Bears swapped roles to net the winning goal.

Rosales, a center midfielder, picked up a ball and carried it down the right-side line in front of Michael Hidalgo, who went from the wing and made a run toward the middle of the field.

“I dribbled down the field, had composure, and I saw him making a diagonal run to the PK spot,” Rosales said. “I just had to put at his feet and he’d score and he did it.”

“I changed my run completely,” Hidalgo said. “It was like we switched positions. I made a good run and was at the right spot at the right time.”

As the Bears looked to close out the final seconds of the game by taking the ball to the corner flag, a McMahon defender slipped on the backline, allowing Norwalk one more goal with 15 seconds to play.

Echeverri crossed the ball to Cesar Rivera to account for the final tally.

“I don’t think we ever truly panicked (while trailing),” Norwalk coach Chris Laughton said. “We tied for three straight years, so that was getting old. We came in with the mindset that we wanted to win and we did.”

McMahon was up 1-0 as the game entered its final stages and Norwalk had gotten away from its game a little bit when one whistle changed the course of the game.

A ball was played into the penalty box, where Norwalk’s Matt Hernandez stepped up to receive the pass with a plethora of people behind him.

As the ball arrived at his feet, though, Hernandez suddenly hit the deck, bringing a whistle and a penalty kick.

“I saw the ball coming to me and I knew where I was on the field,” Hernandez said. “Right there, you have make a play for your team. That’s all I was thinking. You have to do what you can to get the momentum back in our favor. I felt contact. I knew there were players behind me and the only way to get the ball was to go through me, so that’s a penalty.”

McMahon coach Rodrigo Guzman was furious at the whistle.

McMahon might not have a win this season, but it once again played a top FCIAC opponent tough while coming away without a point.

The Senators’ goal, coming with 7:53 left in the first half, was as pretty as they come.

Elias Pardos carried the ball up the left side and sent a cross to Marcus Blair, who one-touched the ball to his feet and buried the volley to give McMahon the lead.

The goal came just minutes after Senators goalkeeper Norberto Santiago made two leaping slap-away saves to keep Norwalk off the board.

“We played hard. That’s all I can say,” Guzman said.