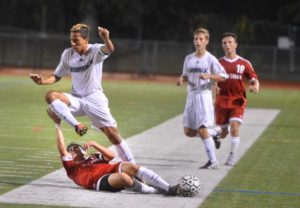 NORWALK — After a tie and two losses in its last three, Norwalk coach Chris Laughton stressed getting off to a quick start Thursday.

Three goals in the first 13 minutes did the trick, and the Bears went on to rout New Canaan 6-0 at home.

“The last three games we’ve come out flat and we were hammering that we had to come out right from the start,” Laughton said. “Scoring three goals in 13 minutes sets the tone for the game, so I was glad to see we came out with some intensity.”

Fredy Rosales set up Christian Moncada with a perfect feed to start the scoring in the fifth minute, then two minutes later tallied himself from close range.

Michael Hidalgo added a third goal in the 13th minute off a long, high pass from Iovanni Robledo that Hidalgo was able to chip in, and Norwalk took a 3-0 lead into the half.

That speed from top to bottom was the most evident difference in the teams Thursday night.

After Maicol Ruiz made it 4-0 just six minutes into the second half, Hidalgo notched his second of the game.

Hidalgo would be the only Bear to tally twice in the contest, as Matthew Hernandez finished off the scoring in the 58th minute.

“That’s important,” Laughton said of spreading the ball around. “We don’t want to be one dimensional. We showed that this year a lot of guys have stepped up and scored goals, whereas last year it was all from one person. It makes us more dangerous in the attack when you don’t know where the goals can come from.”

After dropping their match Tuesday 2-1 to Fairfield Ludlowe, the Rams never could find their legs against Norwalk.

“It’s a ridiculously hard conference, every single game is tough,” New Canaan coach Rich Sutherland said. “We exerted so much energy on Tuesday night and we just weren’t here at all today. We just started very slowly, yes, they were quick, but we struggled to get anywhere near what we’ve played like all season…they were better than us all over the field.

Rosales, Norwalk. The junior has an assist and a goal in a two-minute span early in the game to spark a Norwalk team that focused on getting off to a good start.

After having just one rest day between its last game and Thursday, New Canaan will again have to play on Saturday against Brien McMahon.

“It’s tough,” Sutherland said. “We have to regroup again and get back and get some kind of energy back for McMahon. They played tonight as well, and we have to have a better performance than we did tonight.”

After Hidalgo’s second goal, the junior sprinted to the left corner of the field and imitated a bear—Norwalk’s mascot.

“That’s my thing,” Hidalgo laughed. “I had a hat trick as a sophomore last year, but there wasn’t a crowd. Now that there was one, I wanted to do it.”