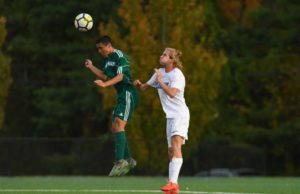 DARIEN — After suffering two losses last week, Norwalk was in need of a boost in its final game with the FCIAC playoffs looming.

That boost came Monday in the form of a 4-0 road win over Darien.

“It should give us a lot of confidence heading into the playoffs,” Norwalk coach Chris Laughton said of the win. “We had two tough games last week that we lost, so it was good to see us rebound this way.”

Norwalk got the scoring started midway through the first half on a penalty kick goal from Fredy Rosales, then made it 2-0 before the break when Matthew Hernandez set up Iovanni Robledo on a set-piece executed to perfection.

“Once you give a goal head start, you’ve got to keep a clean sheet up until halftime to make the game competitive,” Darien coach Jon Bradley said. “But once they got the first goal, their speed of play was too much for us.”

That speed may be the Bears’ (9-5-2) biggest advantage, but Laughton preaches that it means nothing without the mental capacity to utilize it.

“It’s definitely a quality that we have and that we have to utilize,” Laughton said. “But it’s using our speed and also using our minds at the same time. You can have speed, but if you don’t have any direction of where you’re going or what your options are, speed’s a waste. We have to utizile our speed, but also understand the game.”

Both the legs and heads of Norwalk continued to work in the second half, as Hernandez had another perfect feed — this time to Sebastian Echeverri — who banked a shot off a Darien defender and in for a goal and a 3-0 lead early in the second half.

Maicol Ruiz added the exclamation point with a penalty-kick goal into the upper-left corner in the 59th minute.

Hernandez, Norwalk. The junior tallied two assists in the contest, both on tremendous setups to give his teammates a high-percentage look.

“Matt’s a guy we try to play through a lot,” Laughton said. “He sees the game really well. I thought he did a good job of setting his teammates up — he’s had a great year for us and I think he showed it today.”

With the lopsided score and late-season setting, both teams opted for heavy substitutions with around 15 minutes remaining in the game. All told, 18 players substituted in during a five-minute span.

EYES ON THE FUTURE

After two successful seasons in 2015 and ’16, Darien lost virtually every starter to graduation heading into this season. Bradley hopes the trying year will benefit his young players going forward, much like it did with Ridgefield, which went from a three-win team two years ago to the top of the FCIAC this season.

“You’ve got to learn and grow from it,” Bradley said. “You look at a team like (Norwalk) and they had seven seniors and four juniors on the field and our last few games were slightly different, we started nine or 10 underclassmen so you hope that they learn from it. … Today was a little blip, but the last five games we’ve played well.”