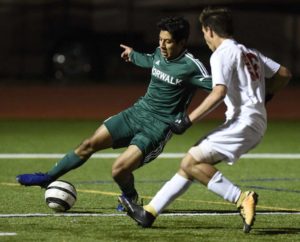 FAIRFIELD — The Greenwich boys soccer team was supposed to take a step back this season, with only two starting players back from last season’s FCIAC co-champions.

The Cardinals have done a bit more than expected, and after beating No. 6 Norwalk 2-0 in the FCIAC semifinals at Taft Field at Ludlowe High School on Monday night find themselves right back in the FCIAC championship game.

The No. 2 Cardinals’ opponent in Thursday night’s final will be none other than the team they tied for the title last year, No. 5 Trumbull.

The Eagles got back to the championship game by virtue of a 1-0 overtime victory over Danbury earlier in the evening at Taft.

Greenwich coach Kurt Putnam said this year’s team has been motivated trying to establish their own legacy at Greenwich and have done so by outworking everyone else.

“Last year we may have been a little bit better but I don’t think last year’s team worked as hard as this year’s team does,” Putnam said. “These guys have really stepped up and have been absolutely fantastic to watch. Their work rate in games is just so unbelievable. We are passing the ball around really well and creating chances. We also kept a really good team and neutralized them again.”

Greenwich has not allowed a goal in two playoff games so far.

The Cardinals struck first on a strike by Martin Garcia.

With 16:28 to play in the first half, a deflected 50/50 ball came to Garcia’s feet and he finished by firing the ball into the right side of the net.

The Cardinals would add a goal early in the second half.

Garcia took a penalty kick after a push in the box by Norwalk, but Bears keeper Gianluca Trofa saved the shot.

Woojin Kwak of Greenwich pounced on the rebound as Norwalk stood and watched, putting the ball home and giving Greenwich a 2-0 cushion.

“They’re a great team. There’s a reason they’re one of the top teams in the FCIAC and the state. They don’t have any weaknesses,” Norwalk coach Chris Laughton said. “We made two bad mistakes in the back and they made us pay. Good teams are going to do that, but I didn’t think we made the most of our opportunities. We were not as efficient in the attacking third as we should have been.”

Martin Garcia, Greenwich. Garcia, who is often marked by two men, scored the first goal of the game and caused problems for Norwalk all night.