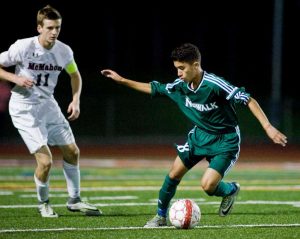 NORWALK — The Norwalk Bears have had it with ties, having played three such games in their last three outings.

The Brien McMahon Senators, meanwhile, were looking for any kind of positive result and a draw against their cross-town rivals certainly fit the bill.

Both teams scored first half goals and then survived some second half opportunities while battling to a 1-1 deadlock atJack Casagrande Field.

McMahon’s Matthew Myers and Norwalk’s Lucas Arajuo were the two recipients of perfectly placed passes to score goals in the first half before Senators goalie Jake Berkowitz (5 saves) and Bears keeper Cole Judkins (8 saves) both threw up second-half zeroes in the game.

“We’re blessed because we just played a top team,” McMahon first-year coach Rodrigo Guzman said. “I believe they played better than us, but we just had the will today that we weren’t going to lose. I’m proud of my boys.”

Fabian Vargas booted a long direct kick from nearly 30 yards out in to the box where he had two 6-foot-4 targets — Myers and Carlos Chacua.

This time Myers was the recipient and he sent a header across the goalmouth inside the far post.

“What we do is we look for the back post,” Myers said. “We’re the tallest guys in the FCIAC, so our main play is to send up two of the tallest guys and go back post. That’s what we practice and today it worked.”

It only took Norwalk six minutes to find the equalizer — in equally pretty fashion.

On a corner kicker, the Bears’ Jose Carvajal played a short ball to Sebastian Echeverri, who was well short of the near post.

Echeverri gathered the ball, and without turning around, sent a kick over his head and behind toward the back post, where several Norwalk players were crashing the goal.

Lucas Araujo was able to get a foot on the ball before Berkowitz could slip back into position and the game was tied at 1-1.

“We always practice that all the time and it came down to execution,” Araujo said. “Right when we called out the play, (Echeverri) knew what he had to do it and he landed it right at my feet and I Just had to put it away.”

While both teams had good scoring chances that were denied by the opposing goalkeeper, it was Berkowitz who likely preserved the tie with a spectacular save on a rebound 10 minutes into the second half.

Norwalk’s Michael Hidalgo laced a screaming shot from 25 yards out that Berkowitz made a diving save on. The ball, however, caromed directly to Echeverri who was crashing the net down the middle of the box.

“We just have to finish,” Echeverri said.

Berkowitz hopped to his feet and lunged the other way, getting his hand on Echeverri’s shot and pushing it away from the goal.

“I saw the shot coming from 25 yards out and I knew it would be a tough one to hang to,” Berkowitz said. “I tried to parry it away, but I saw it went right to (Echeverri) so I had to get up fast and it was just bang-bang. I just kind of reacted and made the save.”

Both teams also lost two players to injury in the second half.

Norwalk’s Matt Hernandez hit his head on the ground and couldn’t get cleared to play while McMahon’s Peter Rivera went off with an ankle injury late and didn’t return.

“Our season hasn’t been the best — we only have three wins — so it’s nice,” Myers added. “A cross-town rival, you can’t lose, so we’re happy with the tie.”

Norwalk coach Chris Laughton added, “I thought we had quite a few chances, especially in the second half. It’s unfortunate how some of those went, but it’s always going to be a battle when you play them.”

McMahon (3-7-2) will travel to Fairfield Warde on Saturday for an 11 a.m. game while Norwalk (4-5-3) hosts Fairfield Ludlowe at noon the same day.