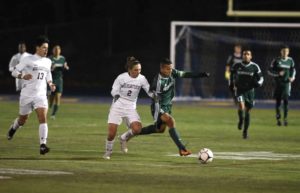 NEWTOWN — In a game that seemed destined for penalty kicks, one came a little earlier than expected.

And it ended the Norwalk boys soccer team’s season.

Vinicius Knupp’s penalty kick goal just 1:08 into overtime proved to be the difference as top-seeded Naugatuck held on for a 1-0 Class LL semifinal victory over No. 20 Norwalk on Monday night at Newtown High’s Blue and Gold Stadium.

The defeated ended Norwalk’s season at 13-7-2 as the Greyhounds advance to this weekend’s big school championship game against Glastonbury.

Freshman Chris Akindura picked up a ball just outside the box and spun his way into the penalty area before being taken down by a Norwalk defender.

Knupp then stepped up to the PK line and buried a shot to the low right as Norwalk goalkeeper Gianluca Trofa guessed in the opposite direction.

“Chris did a great job to turn his defender and get fouled and Vinny stepped up and nailed it,” Naugatuck coach Ryan Kinne said. “It was a relief.”

The goal, coming after 81-plus minutes of back-and-forth action, only staked the Greyhounds to a 1-0 lead.

With no sudden death on the rule book, Naugatuck still had to withstanding 18 more minutes of Norwalk trying to get the equalizer.

In the final minute of the first 10-minute overtime session, the Bears almost got even.

Cesar Rivera carried the ball down the left side line and fed a shot ball to Fred Rosales, who centered a pass to Bears star player Sebestian Echeverri.

Echeverri blistered a shot that was saved by Naugatuck goalie Aren Seeger, who let the rebound bounce back toward the Bears’ player.

Echeverri got off a follow up toward the open net, but a Naugatuck defender stepped in to clear the ball of the line, sending it up off the crossbar and into the arms of Seeger to end the threat.

“I’m just disappointed we didn’t finish any of our chances,” Laughton said. “We had some good looks on goal, but that’s the game. Sometimes you’re on the other end.”

Echeverri also had a big opportunity late in regulation when he found the ball in the penalty area and again laced a shot on Seeger.

Seeger, who is being recruited by a number of Division 1 programs for soccer and track, never had to make a save, though, as the ball deflected off a defender and out of bounds for a corner kick.

The corner kick also went for naught, however, as the Bears were shutout for the first time since a 1-0 loss to Ridgefield on Oct. 18.

“They have some dangerous players,” Kinne said. “Our back four has been very good all year, limiting people and Aren picks up the pieces behind them. To keep a team of that quality off the scoreboard for 100 minutes is not easy.”

Laughton said it was more than just the defeat that hurt.

“It’s a tight-knit group that really enjoys playing together,” he said. “They’ve endured some tough times the last two years, but it gave them motivation to put Norwalk High back on the map. I think it’s going to be just as hard not practicing tomorrow as it was losing this game tonight. It’s not easy.

Norwalk once again went with its two-goalie tandem of Cole Judkins (4 saves) and Trofa (3 saves) while Naugatuck went with its future Division 1 goalie Seeger (5 saves) for the entire game.