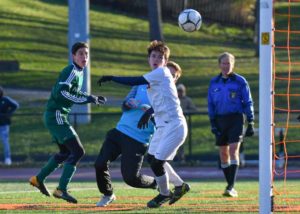 RIDGEFIELD — Still overwhelmed by the magnitude of the moment, Michael Hidalgo needed a minute to compose himself and collect his thoughts.

His remarkable goal with two seconds remaining in overtime Friday lifted the 20th-seeded Norwalk High School boys soccer team to a 2-1 victory over fifth-seeded Ridgefield in the Class LL state quarterfinals, and in the immediate aftermath of the 100-minute fight for survival, Hidalgo’s tears poured out in a torrent of unabated joy.

When the tears subsided, Hidalgo lifted his head, smiled and said “We just fought to the end.”

And that’s exactly what the Bears had done — fought to the bitter end.

With the score tied at 1 and the final seconds of overtime ticking away, it seemed a foregone conclusion that the game would be decided in penalty kicks. That was when Will Gaviria gathered a loose ball near midfield and threaded a perfect pass through to Hidalgo streaking down the right wing. Hidalgo made sure to stay onside as he collected the pass, then delivered a low shot just inside the far post.

“I kept running. I kept playing to the end,” Hidalgo said. “It was a good ball, and I finished.”

And booted the Bears into the state semifinals for the first time since they won the state title in 2012. Norwalk will face the winner of Saturday’s quarterfinal match between top-seeded Naugatuck and 25th-seeded Wilbur Cross in the semifinals on either Monday or Tuesday at a time and place to be announced.

“A lot of people underestimated this group,” Norwalk coach Chris Laughton said. “We had our ups and downs during the year, but I feel like we’re playing our best soccer at the right time. I’m just really proud of these guys. They don’t give up, and they don’t quit.”

This was the second straight year Ridgefield was knocked out of the state tournament by Norwalk. Last year, the 35th-seeded Bears edged the 30th-seeded Tigers on penalty kicks in the Class LL qualifying round.

In fact, Ridgefield has seen nothing but FCIAC rivals in the state tournament each of the last three years. In reaching this year’s quarterfinals, the Tigers beat Bridgeport Central and Staples. In 2015, the Tigers lost to eventual runner-up Darien in the first round.

After a scoreless first half, Norwalk took a 1-0 lead in the 50th minute on a goal by Lucas Araujo. Fredy Rosales had left-footed a corner kick into the box, Iovanni Robledo headed it off the crossbar and Araujo knocked it home.

The lead was short-lived, however, as James Siano tied it with an unassisted goal in the 52nd minute.

“Giving up that goal after we had just scored, it could have gone the opposite way,” Laughton said, “but these guys are mentally tough, and it showed a lot about their character.”

“All in all, they might have deserved the win,” Bergen said. “They had more possession than we did.”