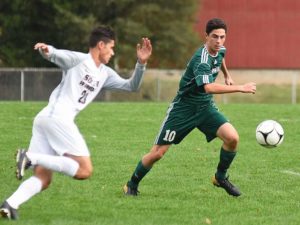 SOUTH WINDSOR — The Norwalk boys soccer revenge tour continues into the second half of the postseason.

For the second time in three years, Norwalk trekked all the way to South Windsor for a first-round game in the Class LL state tournament.

This time around, however, the bus ride back was much more joyful for 20th-seeded Bears, who had posted a 3-1 win over the 13th-seeded Bobcats.

Senior Sebestian Echeverri scored two goals, including the winner on a breakaway with 13:19 to play.

“I was just making sure I was going to score,” said Echeverri, who instead of drilling a shot to either post lofted a perfectly placed soft shot over the on-rushing South Windsor goalkeeper. “I was going to cut inside, but the ball was bounding and I saw he was coming so I just chipped it in.”

Echeverri later clinched the victory with a penalty kick in the 77th minute.

Norwalk was disappointed in its 5-7-4 regular season in 2016 and had dubbed the 2017 campaign its “revenge tour” for the FCIAC season, where the team advanced to the league semifinals.

When the Bears saw their first-round opponent was South Windsor — which defeated Norwalk 4-1 during the 2015 state tournament — the squad just extended their “revenge tour” run into the state tournament.

“When we came up that day, it was the biggest waste of time ever,” said Norwalk coach Chris Laughton, who benched his seniors in that game after they fell behind 4-0. “It was one of the things we talked about, coming up here and making sure it was different. These guys didn’t forget that long bus ride home last time.”

Echeverri was a sophomore on that team and remembered the defeat well.

“We had this saying this season, The Revenge Tour, and as a team we wanted revenge on (South Windsor) because of that game,” Echeverri said.

Norwalk jumped on top early, grabbing a 1-0 lead when Michael Hidalgo punched home a rebound with 25:25 to play in the first half.

South Windsor equalized it 8:15 later when Matthew Dion sent through a long shot on goal from about 40 yards out. The shot went above the Norwalk goalkeepers’ glove and just below the cross bar to tie the game.

Norwalk looked to take the lead back throughout the rest of the half and the first half of the second half, but kept getting hit with offside calls.

“We know it’s going to come, so we keep on trying,” Echeverri said. “We were just patient and didn’t stop believing we could get one.”

The Bears got two and up next is a home game against Fairfield Warde, which stunned No. 4 Newtown with a 2-1 (9-8 in PKs) win.

Norwalk opened the season with a 3-0 win over Fairfield Warde. It was the Bears’ first “revenge tour” win after the Mustangs had won 3-0 the previous season.

Both goalies came up big with the game in doubt.

Norwalk’s Cole Judkins made a nifty punch-away save of a shot by South Windsor’s Daniel Monteserin late in the first half.

During the second half, South Windsor’s Hunter Pasqualini (6 saves) kept the game tied at 1-1 when he denied Hidalgo from point blank-range and then swatted away Norwalk’s rebound follow, as well.

Judkins and Gianluca Trofa combined for four saves for the Bears.

When the Bears made the trip north to face South Windsor in 2015, the game was played on the turf of the school’s football field.

On Monday, the Bobcats opted to host the game on its grass field instead.

“I’m sure it was to slow us down,” Laughton said. “We had every expectation it would be on turf, then we pulled up and saw them warming up here. We were shocked. But, in the state tournament, you have to react to everything and whatever is thrown at you, you have to be able to handle it. I thought we did a great job playing our game.”

“They just looked like a team that wanted it more today,” said South Windsor coach Peter Lepak, as his team, with one senior starter, wrapped up an 11-6 season. “They wanted it more than we did. Give them credit for taking advantage of our mistakes.”