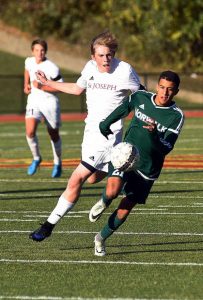 TRUMBULL — The last time the Norwalk boys soccer team was in danger of missing the state tournament was in 2003 and the Bears had two shots to win one more game and get in.

They lost 1-0 in overtime to Ridgefield and battled Danbury to a scoreless tie to finish just outside the postseason.

Faced with the same desperate circumstances on Monday, Norwalk left no doubt it would play again this season, rolling to a 6-0 win over St. Joseph.

Norwalk — which snapped a seven-game non-winning streak that included four 1-1 ties — finished 5-7-4 and will hit the road when the state tournament begins later this month.

“We all came in knowing it was a must-win situation,” Norwalk senior captain and center mid Anthony Hernandez said. “In my four years on varsity, we’d never missed states and it goes back long before that. We didn’t want to be that first senior class to miss states and we made sure of it.”

Jose Carvajal and Sebestian Echeverri staked Norwalk to a 2-0 first half lead with shots from the outside.

“Coach has told us to test the goalie,” Carvajal said. “That’s something we’ve lacked in a lot of other games. I just ran up to the ball the ball and took the chance. You never know.”

Nearly six and a half minutes later, Echeverri found himself off-balance after a late pass found his feet, but he regained his footing and sent a long high ball just inside the far post for a 2-0 Norwalk edge.

“I thought we had good possession in the first half, we just didn’t get enough action going forward,” Norwalk coach Chris Laughton said. “It’s tough going into a game knowing you have to win to make states, but I think the kids handled the pressure well, especially the younger guys who hadn’t been in this situation before.”

One of those younger guys, freshman Will Gaviria, helped the Bears build a lead, turning a Hernandez feed into the goal that made it 3-0.

In the final 10 minutes of play, Norwalk’s Daniel Cano, Alexis Quiche (from Cano) and Justin Lowenbein (from Michael Hidalgo) all scored,.

For Norwalk, keeper Cole Judkins made a pair of saves while Gianluca Trofa went untested in the final 15 minutes of play.

Norwalk pitched the shutout without half of its starting defense, however.

Other Bear defenders such as Lowenbein, Lance Garcia, and Dakota Casey rotated through the back along with starters Lucas Aruajo and Liam Bleakley to help preserve the shutout.

“I thought those guys did a nice job filling in,” Laughton said. “They’ve proven themselves in practices and other games. We knew they could do it.”

St. Joseph’s best scoring chance came late in the first half when Jack McDermott was fed a ball right in the center of the box. McDermott turned on it and got off a shot, but Judkins slid to his right to make the save to keep the Cadets off the board.