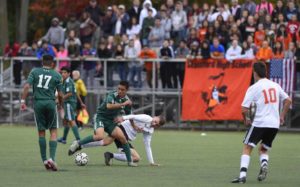 STAMFORD — As if playing in the FCIAC tournament was not enough motivation, the Norwalk boys soccer team also had revenge on its mind coming into its game against Stamford Thursday afternoon.

A few weeks earlier, Stamford beat Norwalk on a goal with 45 seconds remaining. The memory of that painful loss was never out of the Bears’ minds in the quarterfinal matchup at Stamford High.

Following 80 minutes of highly competitive soccer, No. 6 Norwalk could mark off two boxes, beating No. 3 Stamford 1-0 and advancing in the tournament while also picking up the revenge it sought.

“When the kids found out we were playing Stamford, this was definitely a game we wanted back. To lose with 45 seconds left was a tough way to go out, so, we were excited to get a second chance at them,” Norwalk coach Chris Laughton said. “We moved a couple guys around in the second half but I thought we really just settled in as the game went on. None of these guys has played in a FCIAC game before and it took time to get used to it but I thought we settled in and showed great composure in the second half.”

Norwalk advances to face No. 2 Greenwich in the semifinals Monday at Ludlowe High School. Greenwich defeated No. 7 Staples 2-0 Thursday.

The teams were scoreless through the first half but Norwalk struck early in the second half.

Less than three minutes into the second half, Matt Hernandez sent in a corner kick which Sebastian Echeverri got a foot on, depositing it in the Stamford goal.

Though Norwalk got more of the ball in the second half, Stamford did manage a few quality scoring chances but could not finish them.

Stamford’s best shot at getting the equalizer came with 4:27 remaining when Oleh Senyk rang a shot off the crossbar.

“I think maybe they shocked us by scoring that first goal and we didn’t react and we were not able to recover,” Stamford coach Mario Caminiti said. “Norwalk started to manage the game better and play a little better in the second half. We just didn’t react with the composure to stick to our game. Set pieces are constantly thorns in our back and it has happened again. We had some good shots that did not go in but again it was a set piece that killed us.”

Sebastian Echeverri, Norwalk. Echeverri was pushing up towards the Stamford goal all afternoon, finally breaking through on the corner kick.

“This is our revenge tour. We wanted the revenge, so, we were even more motivated and we showed it in the field,” Echeverri said. “It was a corner kick and I made my run and I knew when it was coming in that it was going to be a goal.”

If Norwalk was hot for revenge against Stamford it could be equally motivated for the semifinals playing a Greenwich team it lost to 4-0 to in the regular season.