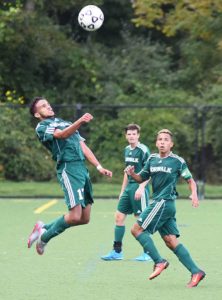 WILTON — Matt Hernandez is built more like a fullback for the football field rather than a forward on the futbol pitch.

Once the Norwalk High junior attacker got into the game against Wilton on Monday, though, he constantly pushed the ball ahead and on net, helping to set up the Bears’ first two goals in a 3-0 victory at Kristine Lilly Field.

“I thought Matt came in and did a great job,” Norwalk coach Chris Laughton said. “He’s a big strong kid who plays the game and sees the field very well. He came in today and changed the complexion of the game.”

The Bears and Warriors were locked in a scoreless deadlock for the first 35 minutes.

Then Norwalk, with Hernandez in the middle of things, struck quickly.

With less than three minutes to play in the first half, Hernandez sent a perfectly timed through ball to Michael Hidalgo, who chipped a shot over the rushing goalie for a 1-0 lead.

The shot deflected back to Echeverri, though, and went into the net for a 2-0 lead.

“The first 20 minutes of the game we were getting to the goal, but just didn’t have that finishing touch,” Hernandez said. “I know my center mids and wings are going to run and I know they can finish, so I was just looking for them.”

Echeverri — who has scored five of Norwalk’s six goals this season — added his second goal off the game early in the third off an assist from Justin Lowenbein.

For the second straight game, Norwalk’s defense has put together a clean sheet.

The Bears followed up Friday’s 3-0 win over Warde with another shutout.

“After the past two seasons, coach (Laughton) has been drilling into us that a shutout is the standard,” Lowenbein said. “It’s nice to be able to get another shutout for coach and for the guys up front.”

Lance Garcia, Cesar Rivera and Jon Roach joined Lowenbein, Liam Bleakley and few other Bears in keep Wilton off the board.

Cole Judkins made three saves for the Bears.

Wilton coach Jim Lewicki isn’t one to make excuses, but licking the wounds of a three-goal loss, he had to wonder, “What if?”

“We’re down five starters right now, so it’s going to be tough for us to deal with,” Lewicki said after his team slipped to 0-1-1. “You just have to try to find guys who will do the job. If we had all our guys, I think it’s a different game.”

Lewicki, who has three players injured and is waiting for administrative protocols to be followed for an incoming transfer and a player who came out late for the team, came away most impressed with two of his youngest players – freshman Ahrav Soi and sophomore Karl Pfeiffer.

“Hopefully, we can build around them and maybe our midfield will perk up a bit,” Lewicki said. “That Norwalk team is a good team. They move the ball.”

“I always love to finish myself, but if I don’t get to I like getting my assists, too. I’ll take it either way,” said Norwalk’s Hernandez after his two-assist afternoon.